For Lisa Hansen, working on a small scale can make a big difference in creativity and design.

Hansen, an interior designer with Area3 Design, says she relishes working with boutique designers like Lanstone Homes, the developer behind Langley’s new Zetter Place community. Spared from the lumbering bureaucracies that can plague much larger companies, designers who consult with boutique developers often find that their creative ideas are heard, respected and embraced.

“We love working with boutique–style developers for various reasons,” says Hansen, who led the interior work for Zetter Place’s two display townhomes.
“They are often more open to creative ideas brought forward and the chain of command is smaller. The communication is easier throughout the project.”
That ease of communication certainly helped Hansen and her team bring their esthetic and creativity to the fore at the Zetter Place display homes.

One of the first ideas Hansen entertained for the spaces focused on the background of the buyers. Many come from Vancouver, where they may be priced out of the market, and although they’re attracted to the bucolic beauty around Langley’s Yorkson Creek, they still prefer to live within what Hansen calls the “urban esthetic” as far as finishes and interior décor are concerned. So she says combining modern design with the homes’ relatively rural surroundings was a must. At Zetter Place, Area3 Design proves that country living doesn’t have to dictate a traditional or rustic interior.

The bright white kitchen, for instance, is contemporary design defined: a model of clean crisp angles that sets the tone for the rest of the space.

“I think for years the assumption was that if you lived in the suburbs then you only liked traditional,” says Hansen.

“With the cost of real estate, a lot of people are choosing to move away from the city for monetary reasons, but we believe they still like the urban esthetic as long as it provides a welcoming and warm ambience.”

Hansen is partial to black as an accent shade, and she uses it throughout the display homes. In one townhome, she sets off the light wood and white walls with black seating in the kitchen, dining and living rooms and with a coffee table and bold artwork. One bathroom boasts two black walls in contrast to a bright white vanity. She predicts that black’s versatility will continue to inspire professionals and homeowners for some time to come.
“This colour is fun to play with as it can be very masculine, fashionable, edgy, traditional, or modern, and it all depends on how you use it.

“A homeowner can play with this shade by adding some flatware to the dining table, picture frames or accents in their space.” 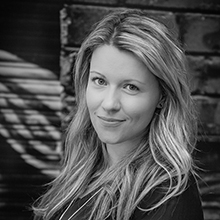